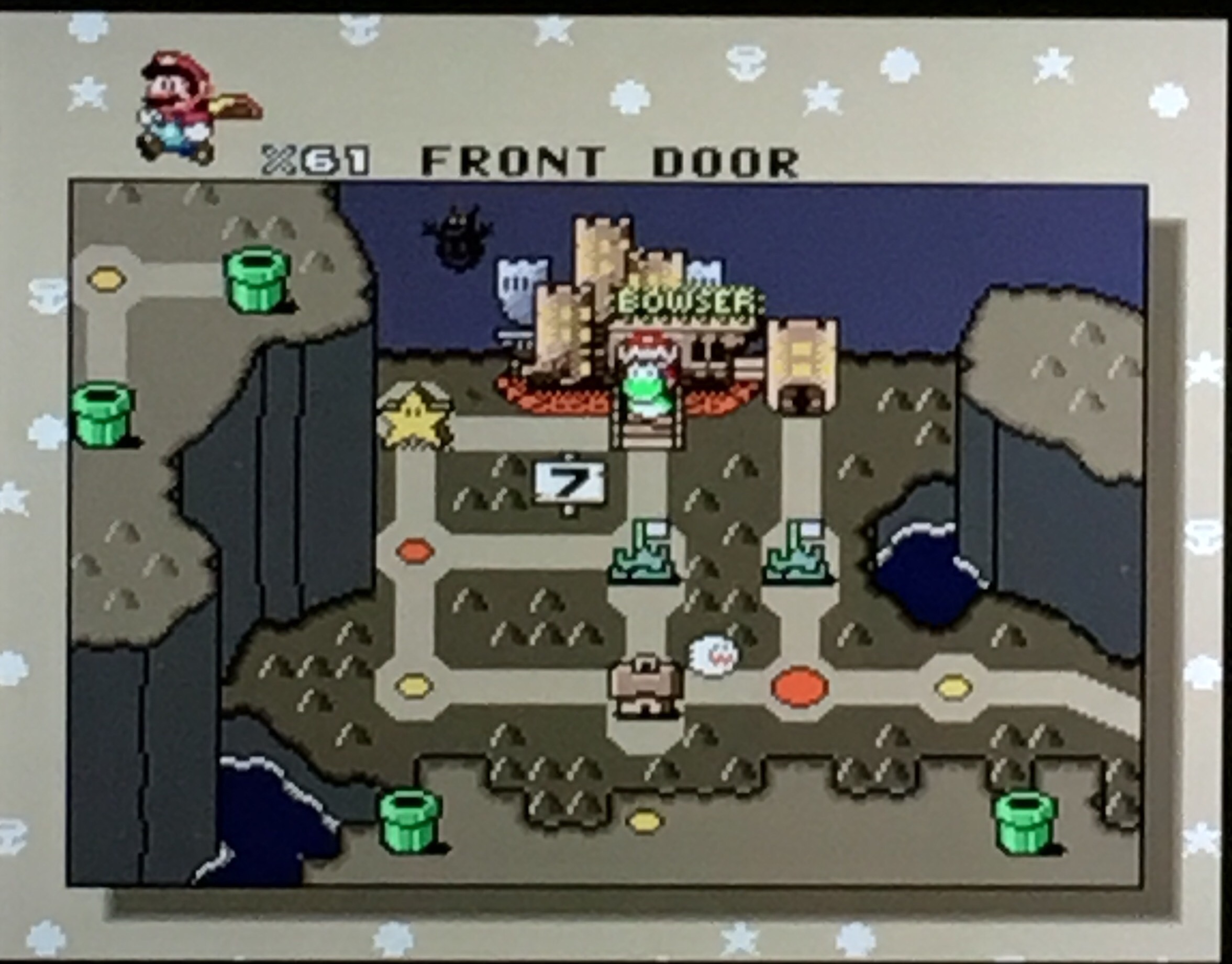 Hanukkah, Circa 1991:  My little brother Scott woke up before me, and by the time I came downstairs to the playroom, he was already pounding away at Street Fighter on our new Super Nintendo Entertainment System, or SNES.   Best. Day. Ever.
There are so many memories tied to that purple and grey console.  When I reconnected with Kenny, my kindergarten best friend, the summer before 7th grade, we spent an entire weekend navigating our way through Legend of Zelda, Link to The Past.  There was no Googling in those days – we actually went to the store and bought the Strategy Guide.    Scott and I spent countless hours with Mega Man X, F-Zero, Pilotwings, Starfox, and more.    One of Scott’s friends is a video game collector – so I shipped off the old console and games years ago.
I’ll admit to being intrigued by last year’s Retro NES and this year’s Retro SNES, but it wasn’t prominent on my radar – until last Friday.   My Facebook feed starting populating with images and stories of friends getting their hands on the Classic SNES.  I was intrigued.   This could be the last time in my life that I am between jobs and childless…if not now, when?
I did check with the wife first; we have a partnership and check in with each other on large purchases.  Granted it was only $80 ($95 with extension cables and tax), but I figured Ellen wouldn’t want to come home to see me playing Mario in bed without having at least some sort of heads up.   I’ve only been married two months, but I’m learning.

Off I went to Best Buy in Madison Heights at 9:30.  There was already a line, and people had been getting “tickets” since 7am.  Luckily the supply at this store outpaced the demand, at least early, and I was in business.

A rush of nostalgia swept over me as I couldn’t wait to get home and play.   I was leery of opening the Pandora’s box that is Zelda, so I started simple, with the beginner circuit of racing game F-Zero.   25 year old memories came sweeping back.  The blue car was the most balanced, the orange was the fastest, and the purple was the most durable.   I finished all 5 races and started browsing the 22 titles in front of me, many with countless memories attached.
I settled in on Super Mario World.   Suddenly, neurons and synapses deep in the recesses of my 12-year-old brain started lighting up like a Christmas tree.

Muscle memory kicked in and I remembered the various button combinations – holding X to run, A to hop off of Yoshi.   Speaking of Yoshi, Blue = fly, Red = fireballs, and Yellow = stomp.    I wish my memory functioned this well when I’m trying to remember why I opened the fridge.
I soon remembered that Red dots on the map meant multiple exits to a particular level. As I delved deeper, I wondered if i could beat the entire game from memory without a strategy guide or (in 2017 terms) a Google search.   I actually pulled it off, despite getting stuck for awhile on Castle #7, the Valley Fortress, and “Tubular” on the Secret Star Road.

When I told my Mom I’d gone “old school” and purchased a Retro Super Nintendo, she groaned, “Oh man, I had to PRY you guys away from that thing.”   She wasn’t kidding.  What the gameplay lacks in 2017 graphics, it makes up for in fun and “addictiveness.”  It was so hard to put down.
I knew my natural inclination would be to play all day.   So I decided to be a grown up and use some discipline.   In my job search, I’m much more effective in the morning, applying to jobs and writing cover letters after breakfast.    So each day this week, I made sure I was up before 8am, walked the dog, ate breakfast, and spent several hours on the job search.   When the day’s “Honey Do” list was done, that afforded me an hour or two to escape the frustration that comes with a job search.
One of the cool features about this retro SNES is its “saving” function.   If you push the “Reset” button on the console, you can save your exact point in the game to one of four slots allotted to that particular title.   This is extremely useful when your wife gets home, or if you want to save immediately before or after a particularly difficult level.

I just wish I’d read the on-screen instructions the second time I used this function.  Instead of overwriting the first save, I reverted back to it and lost an hour’s worth of work.
At any rate, after a week, and about 11 hours of gameplay, I did it.  I beat all 96 levels, including Bowser and the mechakoopas at the end.

I
It made for a nice way to tidy up the week before I head to Boston for a Bar Mitzvah this weekend.   I just can’t believe how much it all came back to me, without looking anything up, 25 years later.
Perhaps next week I’ll try Legend of Zelda: Link to the Past.   If you don’t hear from me by Christmas, send a search party.