My wife and I have become cord cutters. We cancelled our cable subscription and will now get all programming by OTT, or “over the top” media via Internet.
Many people have thought about cutting the cord from Comcast, Cox, AT&T, or whomever your cable provider is. The process can be intimidating, so let me take you through what I’ve found, and hopefully I can answer your cord-cutting questions.
Why? This is pretty simple – cable and internet can typically cost a combined $200 or so per month. If you can cut that in half, or even by a third, why not?
Who? There are may ways to get your favorite programming through services like Netflix, Hulu, Apple, and the apps for the individual networks (ABC, CBS, NBC, and Fox). Some cable channels like ESPN and BRAVO have their own apps, but many require a cable subscription. We looked at the services that provide most cable channels (and our local ones). The website cutcabletoday.com was a great resource for comparing AT&T’s DirecTV Now, Sling, Fubo, and Playstation Vue.  They vary in terms of budget-friendliness, sports programming, DVR, and more.
Where? We have three televisions in our house, in the living room, the bedroom, and the front room where the treadmill is. If we are being honest, that last one isn’t used very much. We have an Amazon Fire TV (from our wedding registry – thanks Uncle Ricky!) and an older Apple TV. Unfortunately, the Apple TV was too old (needs to be 4th generation or newer) to run the new apps. So we bought an Amazon Fire TV stick for around $40. You just need TV’s with HDMI inputs, or even a newer app-friendly Smart TV. 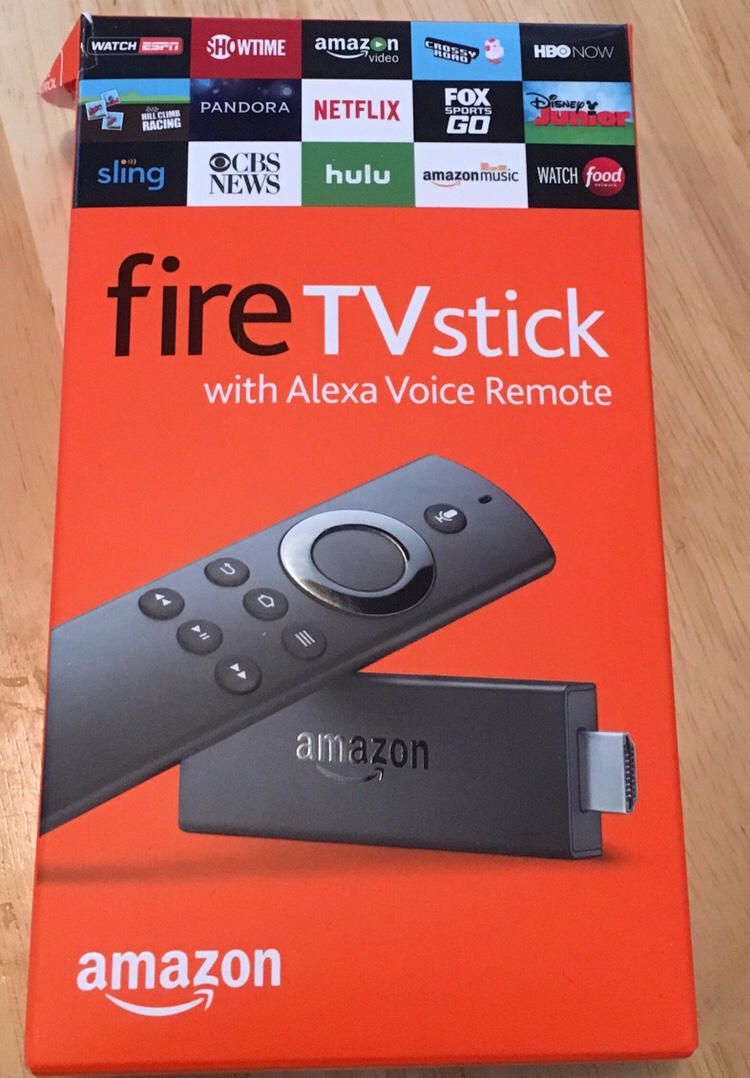 What? We currently have a cable and internet subscription through AT&T U-Verse. Our choices here in suburban Michigan are that, Comcast (whose customer service has burned my wife one too many times), and WOW, as in “Wow, this knockoff internet and cable seems sketchy.” My two year promotional period was ending, and my rate was going to go up to about $200 for 25 MBPS Internet and their U200 TV package, which includes 360 channels. Of course, 300 of those channels we don’t watch. Of course you can “bundle” packages if you want to go to AT&T for your cell phone (we have Verizon) or home security (we have ADT), because they want a monopoly on your home. Furthermore, the quality of U-verse television was beginning to drop. AT&T wants to stop supporting it and get everyone over to DirecTV. We don’t want a dish on our roof.
After comparing the options (most let you try the service for a week free of charge), we figured we would simplify things and stick with AT&T and their DirecTV Now package. There’s no dish required, it’s all OTT (over the top, Internet based), and we already have an AT&T account. We tried DirecTV Now for a few days, but my wife really missed having a DVR.
Next we tried PlayStation Vue, which actually does not require a PlayStation console. We’re very happy with it. Like DirecTV Now, it had all four of our local Detroit channels and local news (this may be different for you if you live in a small town). And like the other service, we had all of our cable networks covered – TNT, TBS, Bravo, Travel Channel, Food Network, TLC, and HGTV for her, CNN and ESPN for me. What sold us on Vue, however, was that it was better than a DVR. Granted you have to retrain your brain for the guide as the channels go across (you can set your favorites), and the times go down the grid. But you can choose “My Shows” and they are stored in the cloud. There is no space limit – though the catch is they only get saved for 28 days. Let’s be honest though – if you haven’t watched something 28 days after it aired, you’re probably not going to. In addition to the DVR however, most popular shows have a CU in the guide – standing for “Catch Up.” If there’s a show or special you wanted to see but didn’t DVR, no worries – you can go back and watch it on demand for up to 48 hours after it airs. Yes, the guide lets you go BACK…IN…TIME! 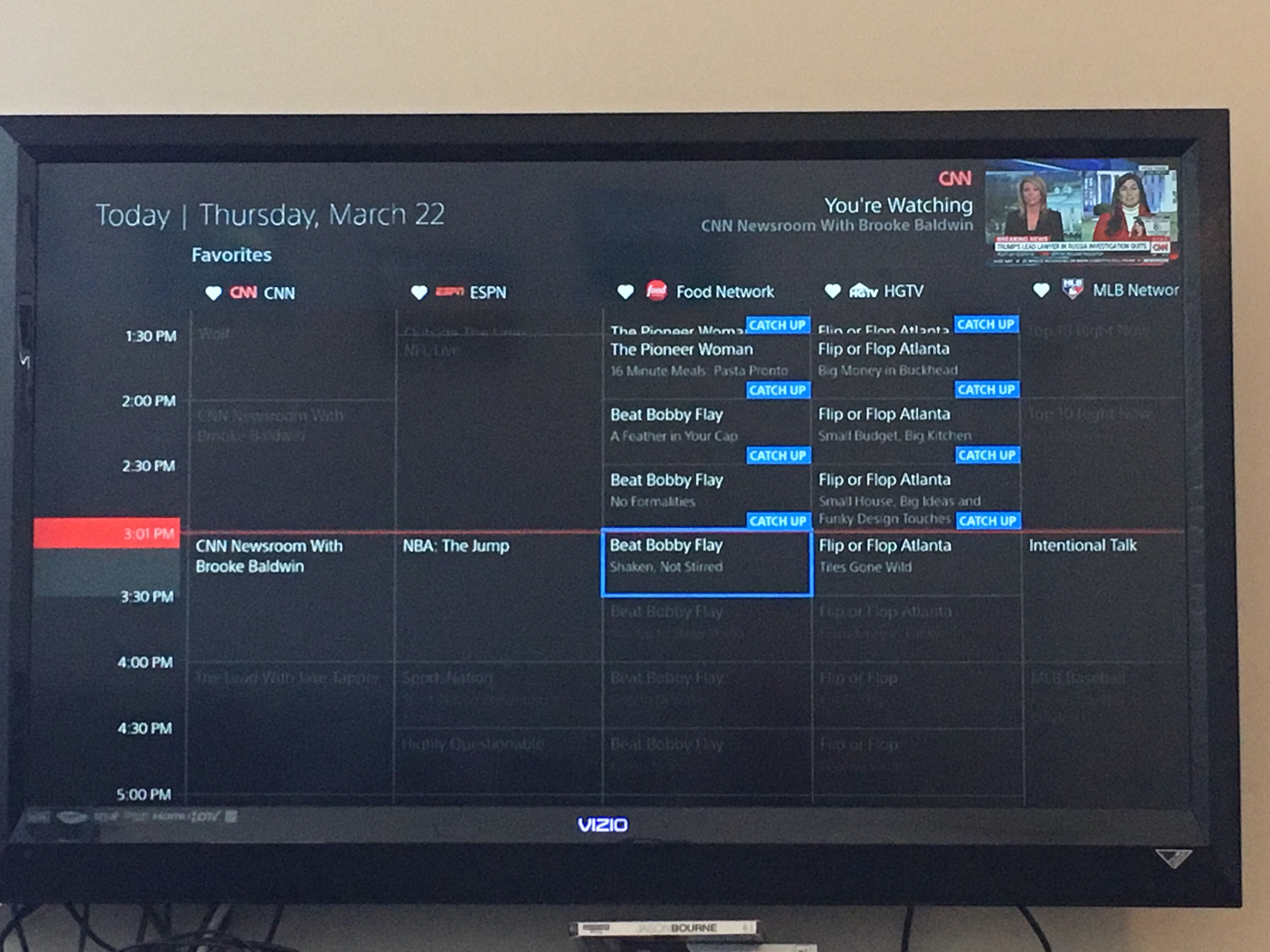 Naturally, the cable company had to be difficult on my way out. To stream live TV, you really need 40-50 MBPS Internet Speed. I had 25, and would occasionally have some buffering. So I upgraded my speed from 25 to 50, assuming my $40/month would become $50/month. Not so fast.
The costs I was looking at were the BUNDLE prices. When I lopped the cable off my account, the web prices went up. Turns out my $50 for Internet was really $70. I did a quick comparison to Comcast, who charges you a monthly equipment fee among others. Deciding I didn’t want to deal with an install and complete equipment overhaul, I bit the bullet and kept AT&T. But I can handle the extra $20 for the web when you look at this television bill from BEFORE my promotional rate expired:

Yes, there are a few “kinks” in our new system. The Amazon Fire device and Playstation Vue app aren’t as intuitive and responsive as a standard cable remote. You can integrate Alexa, but I haven’t figured out that piece of it yet. The remote is small and easy to lose, but you can download an app and turn your phone into an identical one. There may be a bit of lag time on live sports, which will hurt with texts and social media, but I’m not going to worry about that, at least until football season. And finally, when you open Amazon or Vue, you get a pop-up with a viewing suggestion based on previous activity. While a minor annoyance, it takes all of 2 seconds to click “No Thanks.”
PlayStation Vue, like most other OTT services, offer a free 5-7 day trial period, during which you can cancel at no charge. Find the package that’s right for you, and try it. See if you can deal with a few minor inconveniences, and decide if it’s worth the cost savings. To go from $200 a month to $120, we decided it was worth it.